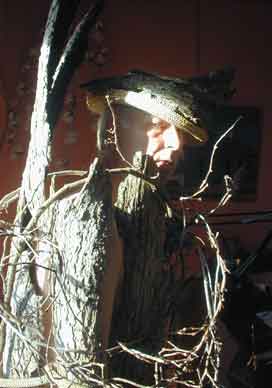 In one of his poems Salvatore Quasimodo called the night I was born – the eighteenth of January 1944 – the darkest night of the war. The little town where I was born was in the Nazis bloody hands, then the Russians’. The homicidal scowl of Stalin declared that our town was never to be part of Poland again. Providence agreed with Stalin, and we had to move to settle in Upper Silesia, an agglomerate of coalmines, steel works and other heavy industries that produced unrestricted clouds of acrid, fetid smoke. Greasy soot covered every blade of grass. My father was a watchmaker and a jeweler. My mother took care of three children.

I escaped trice from two kindergartens and solidified an indestructible sense of being special. I painted and drew from the time I was a small child. In 1963 I went to study painting at the Academy of Fine Arts in Krakow, Poland. Unfortunately for me, any sort of verisimilitude in painting was believed gone, due to invention of photography (as if the invention of television could have killed literature), so the only available instruction was in paint dripping, happy smearing, and closing the ranks of obligatory modernism. At that time, I had just arrived at the conviction, central to my art, that modern art is a worthless, dead-end barbarism invented by dilettantes bent on obtaining the cheapest uniqueness. Horrified by the size and stature of my opponent, I was allowed to work alone in my room at the dorm for the remaining five years, groping and blundering through the glorious past of Western culture, like a rooting warthog, nervous and unappealing.

In 1969, I became a professional artist, and I painted hundreds of paintings, organized many one-man shows and participated in international exhibitions all over the art-collecting world. In 1975, I came to New York and was granted political asylum. It became clear to me that the contact sport of an artistic career demanded a twenty-four-hour-a-day dedication to giving pleasure to the softer parts of Manhattan. I could not do it. I am too arrogant to swallow all the cheese cubes, to fork-lift the mountain of well-wishing cards, to dip my tongue in honey and lick my passage to importance.

The following year I went to live and paint on a remote farm in West Virginia. Those eight years were a time of Dionysian rejoicing. I painted, I tended a garden, and I looked very intimately at nature. They were the most shackle-free days imaginable. Every day stood like a portal of existence, ready to answer the question of what is worth doing in this tall cathedral of freedom. For about 35 years now I have lived in Hillsborough, North Carolina, dividing time and attention between painting and copper engraving.